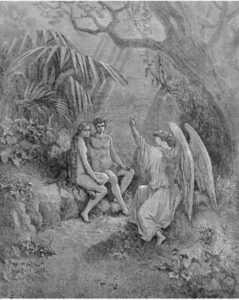 Adam & Eve Receiving Raphael’s Socionomic Instruction
Included in the illustrated version of John Milton’s ‘Paradise Lost’ is this picture depicting Archangel Raphael providing Adam and Eve with Social Education.
Now that Adam and Eve are to be ejected from the Garden of Eden’s paradise they will require socialisation practices; hence the instruction.
Worldly order [political nous] will no-longer be automatic according to God’s providential will – as it was in the Garden.
Raphael is God’s direct messenger for instructing ‘completeness’ or ‘making whole’ [full-healing] – what we as post-Darwin evolutionists call ‘development’ and ‘maturation’.
Raphael is different from Archangel Gabriel who directs God’s strength or Michael who directs God’s likeness [creativity and truth as decisive as a sword].
Raphael explains to Adam & Eve that their descendents [humanity as a whole], if ever they are to again become anything like complete, will need to make a socius [social system and culture] in which they can learn social organisation skills; including hierarchy remediations such as economics and politics.
Engendering socialisation completeness will require practices that include; activity [energeia], acquiring knowledge [episteme] and order-making [taxis]. Since they and their descendents are now ‘fallen’ out of the Garden, any attempt to re-create Paradise, will only ever be achievable via creating incremental social capacity.
The inter-generational learning-process [educare`] enabling social maturation [incremental degrees of greater emancipation] and utopian assimilation [aphomoiosis], when properly understood, is… socionomy.
All the Socionomic Development of their descendents will not be worked out in a straight-forward way [a techne`] because they are forever separated from their original natural world and personal nature. The development will need to be ‘cathartically extracted’ from their people [laos], each person at a time, as a social-psychological purging of the social complexes. Hence Socionomic power is liturgical [emissary \ intermediary media] rather than political or economic power.